In Snow Radish Vacation, Tomaru was a medical student at the same college attended by Asagi Inou and Tomoe Sawagoe.

In Summer Radish Vacation, he was a rich doctor and businessman managing a hospital.

Tomaru was the illegitimate son of Jou Inou and his mistress, a woman of the Sawagoe family. In his youth, Tomaru attended Haramichuu, where he met and fell in love with Moegi Inou, his older half-sister by two years. When Moegi's mother found out about their relationship, she was furious because Tomaru was the son of her husband's mistress. Ultimately, Jou acknowledged Tomaru as his son and Tomaru and Moegi were separated. By that time, Moegi was pregnant by Tomaru and later gave birth to their daughter, Kagura Inou.

By the time Tomaru was the same age as Shun was in Summer Radish Vacation!!, he had already assaulted and impregnated several women.

Years later, Tomaru and Moegi reunited and rekindled their relationship, with Moegi becoming pregnant by him again. One day, while they were having sex near a sleeping Kagura, Moegi asked Tomaru to choose a name for their unborn child. Tomaru ultimately chose the name Ayumu, after which he revealed that he was recording everything, much to Moegi's shock. He then told her that the video was his last gift to her and that he was going to study abroad. Despite Moegi's proclamations that she would wait for him, Tomaru was seemingly indifferent. Moegi eventually gave birth to Ayumu.

Years later, Tomaru returned to Japan and lived in an apartment in Motehara, where he worked as a part-time cram school teacher by the time his daughter Kagura and her friend, Hatsuka Hazama, were third-years of said cram school. Eventually, all the female students of his class would come to admire him, addressing him as "Onii-san". During this time, the girls in the class would go visit him to supposedly play with him, but in reality, he would engage in sexual relationships with them. By the winter semester's end, the only one who hadn't visited even once was Kagura, as there were few chances for her since she lived so far away.

On the last day of spring vacation, it was arranged for all of the third-year girls to "go play" at his apartment. Once they all left, Tomaru decided it was the right time to get away, as it looked like his sexual relations with his students would be discovered. Tomaru then quit his job at the cram school and went to move elsewhere.

During the drive, he happened to pass by Kagura, who couldn't arrive in time to his apartment because her bicycle had broken on the way, and offered to give her a lift. In the car, Kagura told him how she wanted to have visited and played with him at least once. Tomaru then offered to do the "play" he did to all other girls when they visited him. Afterwards, Tomaru drove in silence, prompting a nervous Kagura to confess that although the intercourse had been unpleasant for her, she wanted him to promise to make her his bride if she could do sex satisfactorily. He agreed, which made her very happy. Afterwards, Tomaru dropped Kagura off near her house and they parted ways, Kagura being unaware that he was moving away.

After moving, Tomaru transferred to another college where he befriended Asagi, presumably not knowing that she too was his half-sister. It is unknown whether he became aware of Tomoe there or if he knew about her beforehand. At some point, he asked Asagi if he could come along with her and Tomoe on their trip to Snow Radish, offering to drive them due to his familiarity of the area. There, he planned to seduce and marry Tomoe to get her family's assets.

Nine months after Tomaru had moved away from Motehara, he, Asagi, and Tomoe go to Snow Radish, where he unexpectedly reunites with Kagura. In the room where Asagi and Tomoe would be staying, Kagura brings up the promise he had made to her. However, Tomaru tries to dissuade her, telling her his actual reason for moving away and that he only had sex with her because he thought he would never meet her again. He also tells her of his plan to get intimate with Tomoe during this trip and eventually marrying her.

Despite this, Kagura doesn't give up, and in the end, Tomaru makes a twisted bargain: during the three days and two nights of the trip, if Kagura can do sex satisfactorily with him, he will keep his promise and it will be Kagura's win. If she can't do it or before that, he has sex with Tomoe and the other girls, it will be his win (never considering to honor his end of the "bargain" at all).

After that, Kagura leaves the room and he meets with Tomoe. Once they finish unpacking, Tomaru suggests for himself and Tomoe to take a look at the hot spring. Depending on the choices, Kagura may or may not find them there; if she isn't able to find them, Tomaru will be able to charm Tomoe a bit and if she is able to find them, she will interrupt their conversation.

Either way, Kagura and Tomaru end up returning to the restaurant and there, he meets with Moegi, both of them surprised at their unexpected reunion. They try to shoo Kagura away so they can talk alone, but at this moment, Moegi's friend Arisu arrives at Snow Radish. Tomaru finds Arisu to be cute and seems interested in her, which makes Kagura uneasy.

Some years later, he returned and impregnated Kagura with two more daughters before impregnating Hajime, the latter of whom later died in childbirth because her body was not developed enough. This caused Kagura to end her relationship with him.

At some point, he eventually married Tomoe and had with her a son, Tomomasa. During this time, he also had affairs with (or raped) Mrs. Toda, Mrs. Ogata, and a Ms. Shiba, siring Touri, Kei, and Shinichi respectively.

During the day, his events appear in locations of Summer Radish, with two exceptions related to Wakaba and Natsuhi's routes, that appear on locations of Haramihama. At night, there is no exact pattern of where his events appear. In most of his events, he tries to seduce Mai, Youko, or Kagura until Shun interferes and disrupts him; in some of his events that appear at night, all located in Kagura's room, he's playing with Rio and Rina and Shun interferes. Canonically, Tomaru manages to ensnare Rina and Rio.

Although not directly stated, he's hinted to be the father of Makoto and Itaru Itou, a fact which is proven through external sources. He's mentioned to be divorced from Makoto's mother, but the details of the marriage are unknown, only that when they divorced, he got custody of Itaru and brings her over every month to visit her brother and mother. He doesn't make an appearance and the closest he gets is when Makoto talks to him on the phone, even then his voice is not heard.

Tomaru also sired Youji Shiba, the protagonist of MISS EACH OTHER and the younger brother of Shinichi.

He reappears as the owner of Radish and as with the prequel, he can ensnare various girls such as Rideru and Rika.

Tomaru is a cruel, depraved, and malicious man who does anything and everything to satisfy his own desires, regardless of how his behavior hurts others. This is best shown through his relationships and sexual behavior:

Tomaru's failures as a father are no less significant:

However, it is said that Tomaru was fond of Ayumu, the only son he is known to have acknowledged as such, and who in turn was fond of him, being especially devastated whenever Tomaru left.

Although a successful doctor and businessman, Tomaru also has several shady businesses such as prostitution, which have resulted in massive debts that were sent to Snow Radish. He also appears to be a spendthrift, as in Shiny Days, Makoto can tell Setsuna that Tomaru has a large cruiser and that he doesn't seem to care about saving money. 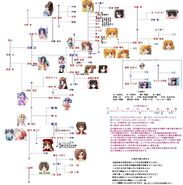 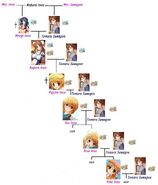 a partial segment showing the lineage of Rika Ino's son 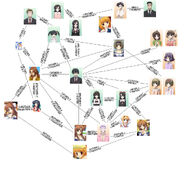 possibly official chart, according to an asterisk a Kagura Chronology exists on page 46 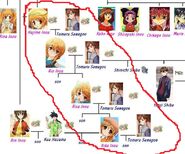 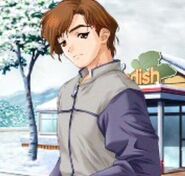 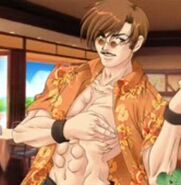 Tomaru with Rina and Rio Inou