Shun Hazama (間 瞬 Hazama Shun) is the protagonist of Summer Radish Vacation!! and a minor character in Summer/Shiny Days.

Shun is the oldest child of Hatsuka Hazama and Tomaru Sawagoe, as well as the older brother of Toki and Kuu Hazama.

During his teens, Shun had a typical teenage boy build and seemed to be on the tall side. He had short brown hair with bangs that cover his eyes, similar to his half-brother Kei Ogata.

In his adult years, Shun has grown into a quite handsome tall man for his age with a reasonably muscular build. His face and hair are slightly longer and the latter slicks behind. He wears two outfits, one of which is a Radish manager's uniform, and the other one is a pink shirt with jeans and gold necklace.

Shun can be best described as a well-intentioned extremist, forming a harem for the sake of protecting the women of Radish from Tomaru.

As an adult, he tries to be a better father to his children, especially to Setsuna Kiyoura, but as can be seen with Futaba Nijou, his vices can get the better of him.

During summer vacation, he quarreled with his mother because she was going out with Tomaru and was displeased with the latter coming to his house. He left home and decided to work at a beach house of a friend of his mother's, Kagura Inou.

On the train, he meets Youko Inou. Depending on the choices, Shun will approach her in different ways. In any case, Shun will end up cheering her up and she will offer him some pocky when she realizes he's hungry and they get along. As they talk, Shun tells her that he quarreled with his mother and is going to get a part-time job where he will spend the summer vacation, and Youko tells him that she is also going to a part-time job in a beach house, but she has thought about quitting work this year because she too left home after a quarrel. Shun then offers to go to work in the same part-time job as her; as the manager is a close friend of his mother, he could ask her to allow Youko to also work there. Youko hesitates, afraid of causing trouble, but she accepts. However, she needs to leave the luggage at her relatives' house and tell them that she will not help this year. They separate, with Youko telling Shun that she'll call when she can go.

Shortly after arriving at the Haramihama Station, Shun bumps into Mai Inou. Due to their similar appearances, Shun confuses her with Youko and because of that, he talks to her as if they were close. As a result, Mai misunderstands, thinking he's hitting on her, gets angry, and asks Shun to carry her luggage. Shun can decide to not carry the luggage and harshly refuse to do it, making Mai get angry again and leave. If he decides to carry the luggage, he'll leave Mai in a good mood.

In both cases, depending on the choices, Shun might end up at Summer Radish or in front of the dorm. In both cases, he is reunited with Youko, who decided to work again at Summer Radish upon discovering that Shun's part-time job was the same as hers. Shun also meets Kagura, Mai's mother and Youko's older sister. During the night, he is called to the welcome party for himself and Mai, where he meets Rina and Rio Inou.

Shun ultimately had relations with Kagura, Youko, and Mai, as well as Wakaba, Natsuhi, and Ms. Kitsuregawa. He also left Rina and Rio vulnerable to Tomaru, who kidnapped and sexually enslaved them, possibly leading to Rina's death and Rio's trauma.

Kagura eventually passed away and the others separated from him. It is known that Mai separated from him because of his womanizing, and it is implied that Youko did so for similar reasons, or that she never forgave him for what happened to Rina and Rio.

Shun used to be the manager at Radish until he got replaced by Youko for sexual harassment. He does, however, come back as a temporary manager if Youko goes overseas. Throughout the game, it's implied that he knows all of his daughters. However, the opposite side varies: only Setsuna seems aware that Shun is her father, while Sekai and the Nijou sisters don't know that he is their father, though they know who Shun is. Inori has no recollection of Shun and it is unknown if Roka knows of him or his relation to her. Nevertheless, Shun tries to be a good father to the girls, even if they don't know of his identity; this backfires with Futaba who can instead become sexually attracted to him.

Shun generally plays a role as Makoto Itou's "rival" toward Setsuna's good ending. In all possible routes, Shun tries to keep his promise with Setsuna of finally being a good father by stopping his womanizing. However, Makoto mistakes Shun as Setsuna's former lover and becomes jealous of the situation as he believes that Shun is betraying Setsuna's trust by being involved with Futaba. Depending on Makoto's choices, he can "prove" to Setsuna that Shun is a liar by bringing her to the scene of him having sex with Futaba or instead show Shun his relationship with Setsuna by raping her in a fit of paranoid lust and rage. Both result in Makoto being shocked when Shun is revealed to be Setsuna's father and in Setsuna running away to Paris. In the former case, Shun successfully breaks off with Futaba, earning Setsuna's trust once more and Mai eventually reconciles with him.

In Inori's route, it can be seen that Shun has a bad reputation around Haramihama Shrine, evidenced by shrine visitors gossiping about him when he reunites with Natsuhi.

Reminding Natsuhi of their relationship. 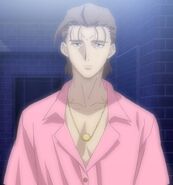 Shun in his other outfit