Disambiguation: Setsuna redirects here. For another character in the shared universe, from the Witch line of games, see Setsuna Kisaragi.

Setsuna is the daughter of Mai Kiyoura and Shun Hazama. Unlike her half-sisters, Setsuna is aware that Shun is her father.

She has been Sekai Saionji's best friend since childhood and to a considerable degree, is overly solicitous of her to the point of hurting others and even herself to ensure Sekai's happiness.

As one of the more inscrutable characters, Setsuna is a keen, focused, and habitually tacit girl who tends to have and keep the most level head of her peers when situations go awry.

Setsuna is the female representative of the same class as Sekai and Makoto, and it is hinted (and later confirmed) that she too has a crush on Makoto. She often overhears their conversations, much like Hikari can at the train station.

Setsuna, Sekai, Hikari, and Nanami used to eat lunch together, but after Sekai befriends Makoto, they all start to assume Sekai's dating him.

Of the main cast of School Days, she's the shortest character and has the smallest bust. Because of her very petite build, she was bullied by Toyama and Matsudaira before her first term and is often mistaken for a junior high student. In Shiny Days, however, she ranks just above Kokoro Katsura, who is promoted to the main cast.

She is almost always seen wearing her school uniform and has medium length dark green hair, which she uses a ribbon to tie up. She wears a waitress uniform during the school festival and can be briefly seen in a coat before she leaves for Paris in the Setsuna's Feelings ending. In I'm His Wife, she's briefly seen with a striped sundress and a scarf, despite it being summer, though it's possible the former is maternity wear due to her pregnancy in that ending, while the latter is a souvenir from her time in Europe where the temperature is potentially chillier.

She has a very impassive personality, speaking without any emotion or tone much of the time. No matter what's happening, Setsuna always seems to be thinking of Sekai's wellbeing, to the point she will either sleep (or pretend to sleep) with Makoto to force Sekai to realize her feelings or, in the anime, to make Makoto stay devoted to Sekai. However, Setsuna is not completely selfless, as she can pursue her own love of Makoto in her own route, although she informs Sekai of her intentions first.

Though Setsuna is a stoic girl, small glimpses to her emotional side can be seen when she's with Makoto or when she's drunk. Likewise, in spite of her general stoicism, Setsuna has a slight habit of making a V-sign with her fingers or smirking lightly (or both) after she wins an argument, makes someone admit to something embarrassing, or simply to convey success.

In Summer/Shiny Days, she's shown to be far more emotional because her own life is being significantly overturned and complicated as opposed to simply observing it happen to someone else as in School Days. It is also revealed that Setsuna is very concerned about people who are or are becoming sick, due to having had a childhood friend to whom she was very attached getting ill and eventually dying.

The below scenario is only available in Episode Setsuna.

During the school's entrance ceremony, Setsuna was bullied by Toyama and Matsudaira because of her small size, but she was saved and defended by Makoto, who encouraged her to become a class representative. Since then, she's developed a crush on him and Sekai tries to help her out by doing research on him, only to fall in love with him herself. During a seating rearrangement she, by coincidence, was sat next to Makoto, but Sekai begged her to change seats with her, to which Setsuna complied, likely realizing at this point that Sekai liked Makoto and let her have a chance with him. Most of the time, she's not connected to the main event but has her own route.

Setsuna's most prominent role is when Makoto becomes a temporary implementation committee member, because they begin to spend more and more time together preparing for the school festival. Makoto then opens up about himself and his relationship with Kotonoha and Sekai along with the confusion he feels in trying to sort it out, ultimately breaking down and crying in Setsuna's arms. Makoto is surprised at himself talking to Setsuna like that and expresses his desire to know more about Setsuna. The next day at the school festival, she and Makoto go to the rooftop for lunch during their break but Setsuna is unable to confess, feeling guilty that she might be stealing Makoto from Sekai.

Later, after the school festival, Setsuna asks Makoto to wait for her and Makoto wakes up to her holding him. Setsuna then finally confesses her love and asks him to take her as a secret between them. Setsuna says that she'll treasure that memory forever but, asks Makoto to forget it for Sekai's sake - revealing her giving into her feelings was so that she could finally have closure about things between them - and leaves for Paris so that Sekai can date Makoto freely. Depending on the players choices, Setsuna can be impregnated with Makoto's child, in which case there is a post-ending scene where she sends Makoto a postcard of herself heavily pregnant and then shows up at his house, saying "I'm his wife" to Makoto's mother.

In most of the routes, Setsuna goes to Paris without any indication of what the reason is aside from there being a promotion with either her mother or Sekai's mother being picked for the job, leaving Sekai depressed at either the loss of her childhood friend or being forced to move out of the country. When it is mentioned, though, it's often inconsistent among the endings. For example, in her I'm His Wife route, the decision is made at least a week before the school festival and she leaves immediately after it, while on some routes like Love Fulfilled, she never leaves and neither does Sekai.

In the anime, after finding out she's going to Paris, Setsuna tirelessly works to make sure Makoto is devoted to Sekai because she knows how emotionally miserable Sekai can become. In the end, she even sleeps with Makoto to make him stay devoted to Sekai - though sadly, it fails miserably.

Unlike her visual novel and anime selves, she does not have to transfer to Paris and thus does not pressure Makoto to be with Sekai. She also appears less willing to drive a wedge between Makoto and Kotonoha.

Setsuna is the main heroine in Summer Days and, even though the player doesn't make any decisions for her, she's considered the main protagonist since the story is mostly told from her perspective. She is shown as shy and timid, in contrast to her more serious portrayal in School Days. Her mother, Mai, only makes an appearance in Summer Days. With the exception of Kokoro Katsura, Setsuna is the shortest character of the main cast and is often mistaken for a junior high school student, a trait she is well aware and conscious of.

She's enjoying her summer vacation before the start of second term when Sekai comes down with a cold and asks her to take her shift at her part-time waitressing job. After a day at the job she doesn't like it, but after going to check out where Makoto lives she runs into him, and is invited to hang out after work. Sekai's illness is revealed to be the mumps, since she never got it when she was a child. Setsuna hates working at the restaurant, but decides to continue because of Makoto. 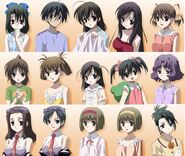 In Shiny Days, Setsuna's portrayal is much same as in Summer Days. During Inori's route, on her first day at Radish, Inori is walking in front of Radish when Setsuna accidentally throws a bucket of water on her after being groped by Ryuuji. Inori is about to forgive her when she sees Karen and the Nijou twins coming and hides behind Setsuna. They pass by but turn around, prompting Inori to grab Setsuna's clothes to hide more effectively, only to accidentally remove her top. Setsuna, in retaliation, knocks out Inori by kneeing her in the head, though not before some passersby are able to take pictures of her breasts. Setsuna drags Inori into the restaurant and, after convincing others that she didn't murder her, Youko takes Inori to the hospital. Youko realizes that Inori has nowhere to go and decides to take her in, but when they get home they find out Sekai's got the mumps. Setsuna's then forced to take her with herself. After arriving, Inori decides to take Setsuna's room before Setsuna can deny her by claiming her wound might open.

In the semi-canonical Paris for Four ending, Setsuna becomes pregnant with Makoto's child. Together with her mother and Youko, who are pregnant as well, she forces Sekai into pregnancy after learning that she feels left out.

In certain routes, she intervenes with Yuuki's murder and blackmail attempts on Sekai, blackmailing him to cross-dress for her class's maid café. As in certain routes of School Days, she later transfers to Paris.

After Yuuki's attempt to expose Makoto's true nature backfires, Setsuna advises him to stay away from Makoto, Sekai, and Kotonoha.

Taisuke didn't get out of the way. Hikari watches in surprise. 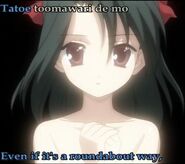 Her appearance during School Days' opening

Setsuna tries to give Sekai some confidence.

Setsuna before she goes to Paris in Setsuna's Feelings

Setsuna drunk during a class party

Setsuna confesses her love to Makoto

Setsuna takes a photo of herself in front of Makoto's apartment

Suspicious of her father's womanizing habit