Sayura Kusumoto (楠本 さゆら Kusumoto Sayura) is a main character from the Witch games Milkyway and Milkyway 2. She also appears in its 2003 anime adaptation (a 2-part OVA series), Milkyway DVD, and returns in the 0verflow visual novel Summer Radish Vacation 2.

Sayura has long brown that she usually keeps in a loose ponytail. She also has green eyes for which she wears round glasses. In SRV2, she more resembles her appearance in Milkyway 2.

Sayura is an everyday bank clerk with a penchant for cosplay. She was also a regular customer of Milkyway and took a part-time job there as a waitress simply so she could wear the uniform.

At some point, she becomes the mother of Madoka Yokouchi. 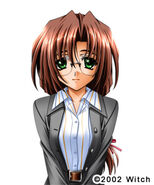 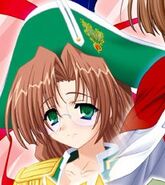 shown on the cover art of SRV2 wearing the L'empereur outfit

Sayura's baby seen in a photo with her mother.