Rin (りん) is a heroine in Summer Radish Vacation 2. She also appears in Sister Princess as "Rinrin" (鈴凛).

She was the third daughter of Kagura Inou and Tomaru Sawagoe. Due to the tradition of children in the Inou family taking on their mother's surname instead of Tomaru's, this has led some fans to refer to her as Rin Inou rather than Rin Sawagoe, although this is not a canonical name used within the games or the official chart.

Gifted in science and technology, she often constructs gadgets for which she often solicits donations from Wataru. 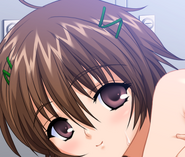