She is Kotonoha Katsura's classmate and has been Makoto Itou's friend since at least middle school. Otome plays for the basketball team and is the de facto leader of class 1-4's girls. She is responsible for the bullying that Kotonoha endures.

Otome is a girl of average height with brown eyes and medium-length brown hair tied into a ponytail. She is quite petite in appearance but has a wide hip, with only Setsuna Kiyoura being smaller than her in the bust department. Being a basketball player, her body is mentioned to be fit.

Otome is mostly seen in her school uniform and basketball uniform. During summer, Otome dresses in more casual clothing with a green shirt of fiery design and gray jeans, exposing her midriff. Also, she wears a pink-orange cloth tied around her waist. She wears a red-white hoodie with short blue jeans during the events of Island Days.

Direct and headstrong, she is usually authoritative to her peers, tolerates nothing but her way and opinion, and does not generally associate with anyone but her trio of friends Natsumi Koizumi, Minami Obuchi, and Kumi Mori; who together frequently harass and coerce Kotonoha Katsura. Most of her aggressive and moody personality seems to stem from her family's problems. Her father is a womanizer, and her mother keeps threatening to kill any women who cheat with him, and her general hatred toward women who seduce men, like Hanon Nijou. She also has a complex over her smaller bust size when compared to Kotonoha, or her younger sister, Karen. She is also a very athletic tomboy in general, playing and being very good at many sports.

In addition to bullying Kotonoha, Otome is also mentioned to have beaten up Hanon in middle school when she mistook her for fancying Makoto, and to have verbally harassed Roka Kitsuregawa about her mother's profession and affair with her father.

Despite her challenging behavior and intimidating personality, Otome is a tsundere who can be particularly tender and shy, especially around Makoto, whom she has known since junior high school and has a crush on. She even studies hard to make sure she can get into the same school as Makoto, though she gets in a different class. Otome is very boyish and felt that Makoto only saw her as "one of the guys." She tries to be more feminine so he can see her as a girl. However, if Otome does make Makoto her boyfriend, she's still her usual outspoken self and not shy anymore.

Otome's acts of bullying Kotonoha can be seen through all of the routes, including her own. She believes that Kotonoha is using her body to seduce all the men in her presence, hence why Otome believes that her bullying is justified. Furthermore, while she rarely is physically abusive to Kotonoha, she can be easily convinced to become such without much question. Otome is even the main reason for Taisuke Sawanaga raping Kotonoha (apart from Taisuke himself not being able to control his lust) by giving malicious advice. She tells Taisuke that Kotonoha's a virgin and that she wants to have sex but is too self-conscious and shy to admit it. With this "advice," Taisuke rapes Kotonoha on the assumption that it's what she desires.

Like Sekai, Otome has liked Makoto for a long time and is mentioned to have expressed her desire to date him before. However, it was only ever taken by Makoto as a joke. Even though she and Makoto are childhood friends, it is stated several times that they are not hanging out anymore, possibly because Otome felt her feelings for him made being with him awkward, as evidenced by how shy she becomes around him. This disconnect and lack of familiarity with each other's current personalities show most noticeably in how Makoto is unaware Otome is the one leading the bullying against Kotonoha. Even when Makoto finds out about the bullying in some of the routes, he's still convinced that Otome's mostly innocent and just following the rest of her group's actions. Likewise, Otome quickly becomes ashamed of herself after finding out Makoto so strongly disapproves of the bullying and believed her to be above it, which is possibly a factor that keeps her from pursuing Makoto afterwards.

In all versions of Episode 4 (The school festival) of the visual novel, Otome approaches Makoto with the intention of inviting him to the "break room", but it doesn't go beyond simply seeing the festival together. In a rare case where Sekai and Kotonoha are both busy, Makoto asks her to see the festival, much to her surprise and happiness. Makoto choosing Otome happens much later after the school festival. See Otome's Ending for more details.

In the anime, she works up her courage to ask Makoto to the folk dance in the episode After Evening Festival. She then invites Makoto to a break room to have sex with him. She's only seen kissing Makoto but, because the anime skips the H-scenes, it's implied that they had intercourse.

After seeing Makoto's indifference to Sekai's possible pregnancy, Otome dumps him, even going so far as to throw away a picture of herself, Makoto, and her sister Karen that she'd apparently kept in her wallet since middle school.

Otome's manga appearance isn't as significant, although she and her friends are still seen coercing Kotonoha to stay at the haunted house's reception desk. Her friendship with (and crush on) Makoto is also left out of the narrative.

During the events of Summer/Shiny Days, Otome helps with her family in the preparation for the summer festival at the Haramihama Shrine. Through the help of her sister Karen, Otome will try to arrange for Makoto to help through the Youth Association in order for him to spend more time with her. Her rivalry with Ai Yamagata is also revealed since both have had feelings for him since middle school, and Otome will try to prevent the latter from spending time with Makoto during the festival.

While she doesn't have her exclusive endings, she shares one with her little sister, Karen. In the ending Becoming Part of the Family, Otome discovers Makoto's in a relationship with Karen and becomes sad. Karen then has Otome confess her feelings to Makoto, and they have sex, which Karen also decides to join them in. Unfortunately, Otome accidentally pulls the blanket that was hiding their actions, and the entire Katou family sees them. This leads to Makoto getting beat up by them, though he's apparently still allowed to date the girls afterward.

Otome can be seen bullying Roka at Gakuenmae, after which Yuuki invites the latter to Sweets Ohara. In one route, Hanon and Niki can explain to Yuuki that the reason Otome always picked on Roka in middle school was because of her projecting her issues with her womanizing father onto Roka, which the latter called her out for.

She does not generally associate with anyone but her trio of friends. They're frequently seen discussing rumors and talking about boys, and also how to frequently harass and coerce Kotonoha.

Makoto is a former classmate of hers from middle school, and they used to hang out all the time. Unknown to Makoto, she's had feelings for him for a long time. In Shiny Days, it is revealed by Karen that Otome joined the basketball club on Makoto's suggestion. She has expressed her desire to date Makoto before, but he dismissed it as a joke, making her "friend-zoned" by him. Even though they don't hang out anymore, they're still very close as far as trusting one another. They can spend an entire night talking to each other on the phone. If Makoto and Otome start dating, they often argue. Natsumi Koizumi explains it to be just the nature of their relationship, due to Otome's outspoken personality.

Otome's younger sister, who appears in Summer Days and its remake.

Otome's friend and rival for Makoto's affection since high school. In spite of a cordial friendship between them, their rivalry can escalate to a dangerous level - even as far as murder, as seen during the events of Island Days. 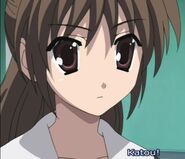 Katou is on the basketball team with Nanami. 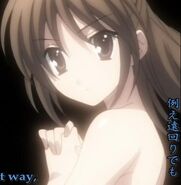 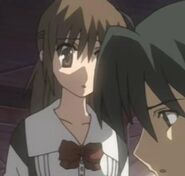 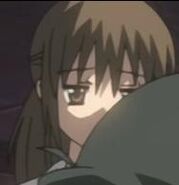 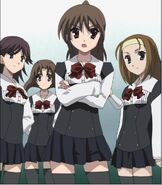 With the trio in episode 3 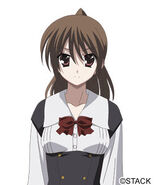