Nanami lives in Haramihama and is known to have gone to the same middle school as Kotonoha Katsura. She has a younger sister named Yae.

She is the only girl of the main cast to have an established boyfriend from the start, a member of the library committee named Kyoichi Kasannoin, though to her chagrin, he is a devout otaku. She's also the only normal one who doesn't get involved with Makoto Itou at all, save for one Cross Days ending, Given Up on Everything.

Of the main cast, Nanami is the tallest character and boasts the third largest bust in the series, just after Kotonoha and her mother Manami. The only clothes she's seen wearing are the school uniform and a waitressing uniform.

A mostly interpersonal character, Nanami is an outwardly mature and a silent tomboy who generally does not stick her nose in the affairs of others and as such remains for the most part unanalyzed. When she's with her boyfriend, she seems to become more shy as she's seen nearly worshipping him.

However, like most of the school's other girls, she holds a negative opinion of Kotonoha because of her own assumptions, thinking that the latter uses her body to get what she wants. While Kotonoha's verbally abused on a regular basis by her classmates, Nanami takes it a level higher, coordinating with Kotonoha's classmates to make her life miserable, simply because her sheer jealousy and presumption doesn't let her believe Kotonoha is Makoto's girlfriend. However, this in turn is arguably based on the (also mistaken) belief that Makoto is aware Sekai has feelings for him, making partly a case of overprotectiveness for her friend by assuming that Kotonoha is the one butting in.

Nanami's friendship with Sekai can be called both very strong yet naïve and presumptive on the former's end, as she seems unable to believe anything but the best of Sekai. She can also Makoto on the assumption that he did something to make Sekai downtrodden, never seeming to consider that Sekai caused her own state via her own inability to be open with Makoto about her feelings (although one could say Nanami was partially right, Makoto's being either oblivious to Sekai's feelings or outright choosing someone else over her, thus arguably contributing just as much as Sekai's own indecision). Nanami is also the one who gave the other girls the idea that Makoto was dating Sekai based on her own assumptions that this was why Sekai spent time with him every day, not knowing that this was actually when Sekai was helping get Makoto together with Kotonoha. Nanami can also lend an inflatable swimsuit bra insert to Sekai (via Setsuna in the anime) when the latter feels envious of Kotonoha's endowments.

While admirable, this level of faith in Sekai is very ironic, given that the only way Nanami could have these beliefs is if Sekai never once told her the truth (or spoke at all) about where she stood with Makoto, or about Makoto and Kotonoha. In spite of her supposed maturity, this seems to paint Nanami as actually being the most biased, presumptuous and petty of all her classmates and friends, since even Kotonoha's classmates - while certainly disliking her - hadn't actually moved to physical abuse until Nanami suggested they do so.

She's featured less than the main cast because she has a boyfriend and is not an obtainable heroine by Makoto. She, like many other girls, has a generally negative opinion of Kotonoha because of presumptions based on jealousy, coupled with misassumptions about Makoto's status with Sekai, bullying her and hanging close to Makoto to keep her away from him.

In episode 10 (Mind and Body), Nanami is invited to a "basketball club party". It is revealed that the event is actually a viewing of secret videos taken of the activities that went on in the breakroom during the school festival. Nanami is the first one shown in a compromising position, and her behavior embarrasses her to the point of breaking down in tears.

It is later revealed that both Otome and Kumi were also caught on tape, though they seemed to be merely surprised and aren't shown crying about it. It is unknown if this is due to their personalities, who they were with (Nanami has a boyfriend, but it is not specified whether or not the boy she was on tape with was him), or possibly the actions being done.

She plays a much more minor role in the manga, though she maintains much the same role as a friend of Sekai.

Nanami becomes more involved with the plot, as her boyfriend is the sempai of Yuuki Ashikaga, the protagonist. In most routes, she'll become suspicious of her boyfriend cheating on her with several girls, including the eldest of the Nijou sisters, Hanon. Depending on Yuuki's choices of involvement with Hanon and Niki, Nanami may break up with her boyfriend after she learns the truth from Kotonoha and will be "comforted" by Makoto, which lead to the bad ending Given Up On Everything.

She's also the subject of Chie Ashikaga's resentment, due to her basketball skills.

As with the School Days manga, Nanami has a very minor role; this time, simply a cameo. 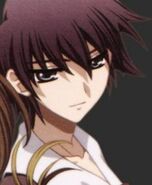 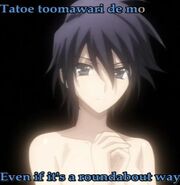