Moeko is a nurse working at a hospital headed by Tomaru Sawagoe. At some point, she entered a relationship with him and had two children by him. She and Tomaru eventually "divorced", and Moeko got custody of Makoto.

From her off-screen appearances in School Days HQ, it can be gathered that she's a kind and caring mother, although she does tend to put down Makoto occasionally. In certain routes of Shiny Days, however, Makoto can mention that when he was a child, Moeko would sometimes scold him to the point that he would run away to the coastline to calm down.

In one episode of School Days, Makoto can mention to his friend, Taisuke Sawanaga, that making cloisonné and silver jewelry are hobbies that his mother shares with him.

She makes her debut as a winnable heroine in Strip Battle Days 2. She has sex with her son Makoto and becomes pregnant with his child. 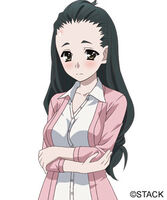 Seen with her Bangs pulled back. 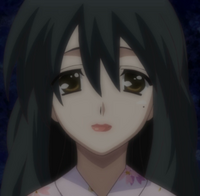