Manami Katsura (桂 真奈美 Katsura Manami) is a minor character in School Days and Cross Days, as well as a heroine of Summer/Shiny Days.

Manami is the wife of Mr. Katsura and the mother of their daughters, Kotonoha and Kokoro Katsura. She doesn't make an onscreen appearance until Summer Days, whereas in the original version of School Days, her voice was only heard.

Like many mothers, Manami is a kind and caring woman to her daughters, but can also be strict, especially with other people, and she is often very demanding, as seen in Summer/Shiny Days during her inspection of Radish restaurant. However, she is not beyond complimenting those who surprise her with their action as she did with Setsuna due to her work ethic and memorization of Radish's complicated menu.

Due to her husband's neglecting her and going to a dirty bar, she become sexually frustrated, had a relationship with young employee, and can eventually start a sexual relationship with Makoto in some routes of Summer/Shiny Days. Manami seems to be clingy, as shown in some routes where she is willing to cancel her work trip in order to be with and make Makoto hers, even going so far as to scare away other girls so that she doesn't share him with others.

In School Days, it was unknown what she looked like until Summer Days, as she appears as a character. Manami bears a slight resemblance to Kotonoha and Kokoro. However, her hair, even though it's raven black, is shorter. She wears red lipstick, and usually seen wearing jewelry, a golden necklace, two rings in her pinky and ring finger of her left hand and one ring in the middle finger of her right hand, and two earrings. She also wears an off-white dress, and often seen wearing sunglasses.

As for Manami's figure, she is tall, slender woman and also quite voluptuous, sporting the largest bust in the series.

In the School Days ending With Kotonoha, an offscreen Manami can be heard talking to Kokoro while Kotonoha is making Makoto a Bento (boxed lunch). Although there a number of accidents that befall her, she says to let Kotonoha learn from mistakes she makes. She worries too, though.

In Summer/Shiny Days, Manami makes a first full appearance in the game as an impatient customer in Radish, who comes and leaves without paying as well as being irritable in general toward the waitresses. However, it is revealed that Manami is actually an inspector who works with Sekai's mother, Youko, to inspect Radish's quality. Although critical of the restaurant's menu complexity and revealing uniforms, Manami praises Setsuna's excellent service and memorization skill, holding her in high regard. It's also revealed that she doesn't get along with her husband lately (when Kotonoha becomes Setsuna's close friend, she tells Setsuna that recently her father went to a dirty bar, and her mother had relations with a young employee, also in another route Kokoro reveal to Makoto that her father once returned home and had a lipstick on his clothes which made her mother mad) but nevertheless tries to have some time for her daughters, Kokoro and Kotonoha.

In two possible storylines, Manami can become one of the heroines. In the first storyline, Manami comes to Radish to help Youko with her preparation on trip to Paris. There, Youko reveals to her that Makoto is her boyfriend which greatly shocks Manami as she witnessed him being involved with Setsuna and her mother Mai earlier. Deciding to end the problem, Manami threatens to expose Makoto's scandal unless he breaks off with the two ladies. However, she is seduced mid conversation and has sex with him outside Radish. Still not satisfied, she takes Makoto to her house to continue their actions after making her daughters leave the house for a day. Later, due to her clinginess and not wanting her daughters to fall for him, Manami secretly visits Makoto's house (also scaring away the Nijou twins at the same time) to have sex and prevent him from going to Summer Festival with her daughters (Banquet of Mothers).

There are two alternate routes in which Youko manages to find out about their relationship and fights with her over the ownership of Makoto: if Makoto had sex with Mai too, leads to Mai's ending, Mai would secretly snuggles him out with her under their noses; if he didn't, leads to Manami's ending, Setsuna fetches Makoto from them, then he leaves with Karen and the Nijou twins.

In another storyline, Manami encounters Makoto much later after returning from Paris due to Youko asking her to find and recharge her cellphone that she had forgotten at Radish. Similar to above storyline, Manami also threatens him but gets seduced which leads to another of two endings: Ripened Fruit and Sleep With the Entire Katsura Family Project, the latter in which she also becomes pregnant with Makoto's child.

In Cross Days, Manami makes only minor appearances. She is usually seen giving Kotonoha advice in relationship like in School Days. 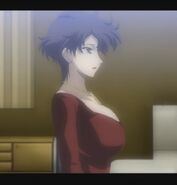 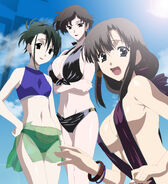 With fellow mothers Mai and Youko

Manami during the events of Cross Days

With her daughters Kokoro and Kotonoha
(Summer Days)

Satisfied with herself
(Summer Days)