Makoto Itou (伊藤 誠 Itō Makoto) is the protagonist of School Days, Summer/Shiny Days and Island Days, as well as a side character in Cross Days.

A generally mild-mannered student of class 1-3, his life becomes more complicated when seatmate Sekai Saionji helps him with his romantic life and sets him up with Kotonoha Katsura.

Makoto is the eldest child and only son of Moeko Itou and Tomaru Sawagoe, as well as the older brother of Itaru. It is unknown if Makoto is aware that he and Itaru aren't their father's only children.

As of his parents' "divorce", Makoto lives under the custody of his mother, who works long hours as a nurse. As a result, Makoto is often left to his own devices and provided many opportunities to pursue sexual relations with whomever he wishes.

Makoto is a boyishly attractive young man with a slightly lean build and average stature. He usually wears a school uniform or casual clothes, depending on the occasion. It has varied slightly in the three games.

Generally, Makoto comes across as a gentle and nice guy and gets along with girls without much trouble. However, he is somewhat of a loner who isn't all that outgoing, and is described as "troublesome" and "depressive" by his best friend Taisuke Sawanaga in Cross Days.

He enjoys a very close relationship with his little sister Itaru, who loves him dearly. This is evidence that he is good with children, due to the fact he also gets along with Kotonoha's younger sister, Kokoro.

Early on in the main visual novel, he is very indecisive, unable or unwilling to choose among the girls he comes across, possibly because he doesn't want to hurt anyone's feelings. This results in not breaking things off with any girl. He is also weak-willed and can easily fall under other's control; even Kotonoha has been shown to be able to manipulate him. Moreover, Makoto seems to possess a "natural dull", acting too slow when girls confess to him. This renders him even more indecisive, as seen when Otome Katou confesses to him.

In the visual novel, Makoto's personality can develop differently depending on the player's actions. For example, he can be more caring and protect Kotonoha from her bullies, be decisive and commit to a single girl, or be indecisive, continue relationships with multiple girls, and have it end badly for him and whoever he's involved with. He's capable of true love in some routes and can even admit to his indecisiveness.

Makoto is shown to be more selfish than in the visual novel, possibly not even aware of it. While he can still be kind outwardly, he often lets his libido get the better of him. This is shown when he becomes bored of Kotonoha due to the lack of sexual activity in their relationship and (possibly) lies to Sekai that he loves her to get her to sleep with him. Sekai doesn't want to continue the affair until Makoto breaks up with Kotonoha, but due to his indecisive character, he ends up simply ignoring Kotonoha and lying to Sekai that he broke up with her.

His behavior worsens as the series progresses, as he ignores both Kotonoha and Sekai and starts to sleep with every girl who shows an interest to him. Later in the story, his lovers cut all ties with him because he refuses to take responsibility for Sekai's possible pregnancy. Ultimately, Makoto loses his life when he tries to dump Sekai and go back to Kotonoha.

Here, a different side of Makoto is shown as his actions are based more on love than lust. His character has similarities to that of the anime; however, in the manga, he does genuinely love Kotonoha, feels guilty about cheating on her with Sekai, and he does not show interest in any other girls. He tries to set things right by amicably breaking up with Sekai, which she accepts, and coming clean to Kotonoha, who forgives him. However, Kotonoha has already gone insane and attempts to kill Sekai, which Makoto interferes with, getting himself stabbed instead. Despite this, he blames himself for Kotonoha's state of mind and tells Sekai that he will go live with Kotonoha to ease her pain, only to be horrified when Sekai gloats to him about killing Kotonoha herself.

During his second term of his first year of high school he takes notice of a girl on his train but is completely clueless about what to do. His luck changes when a seat change occurs on homeroom and Sekai Saionji is seated next to him. After Sekai discovers Kotonoha's picture on Makoto's phone and finds out about his crush she decides to help him make Kotonoha his girlfriend. They have lunch on the roof and Makoto and Kotonoha introduce themselves and set up a date to go to Sakakino Hills. Before their date Sekai kisses Makoto, later claiming it was only a tease.

From here on Makoto's personality, choices and affections develop drastically different depending on the player choices. Makoto's fate varies from ending up happily with a girl to getting himself or his loved ones killed. He can end up with Kotonoha, Sekai, Hikari, Otome, or Kotonoha and Sekai together. In one ending, he can have sex with various girls while regretting what his life has become. In the bad endings, his actions can lead to any one of Kotonoha, Sekai, or himself getting killed. See endings for more plot details.

The anime initially plays similarly to the visual novel, though there are many small plot details added to pad out the series' 6-hour length as opposed to a shorter duration of a single playthrough of the visual novel. For example, Makoto relies on a book for relationship advice, which only makes things worse. Sekai offers to let Makoto "train" with her before he confesses his love to her (or lies just to sleep with her). Makoto continues a relationship with Sekai until the school festival when he has sex with Otome. He then continues to have sexual relations with multiple girls, including Hikari and Otome's Trio of friends. His phone's address book also has dozens of girls not even mentioned but is implied to be girls that he had sex with. Kotonoha is still unwilling to give up on Makoto and goes insane because of her abandonment and being bullied by Otome and her friends.

Sekai is then revealed to possibly be pregnant by Makoto. She wants to have their child and have a life with him, but because of Makoto's indecisiveness, he refuses to take responsibility. Sekai has an outburst in class, informing everyone of the situation. Almost every girl Makoto had relations with cut all ties with him, fearing that the same could happen to them if they keep seeing him. On a later night, Sekai cooks Makoto dinner at his home while he goes out for a walk. Frustrated that all of the girls he slept with have blocked his number, he finds Kotonoha, and seemingly begins to repent for the way he's treated her. He decides to get back together with her, going as far as taking her home and making out with her in front of Sekai. He then texts Sekai that Kotonoha knows a good doctor, implying that he wants the former to get an abortion. The next day, Sekai stabs him to death, leaving his corpse to be discovered and decapitated by Kotonoha. After killing Sekai on the school's rooftop, Kotonoha sails away on a boat with Makoto's severed head, claiming that now they can finally be alone together.

As in the anime, he cheats on Kotonoha with Sekai, but he does love Kotonoha and feels guilty about the affair. He then breaks up with Sekai, who accepts being dumped but still wants to remain friends. He begs Kotonoha to forgive him, which she does, but she is already too far gone and attempts to kill Sekai. Makoto jumps in-between the two, getting slashed in the process. Makoto ultimately survives and despite what happened, he wants to return to Kotonoha because he blames himself for the entire ordeal and feels he should take responsibility for what he's done.

However, a week into hospitalization, Makoto receives a panicked phone call from Kotonoha's sister, Kokoro, who tearfully informs him that her sister is bleeding to death. When Makoto informs Sekai about this, he then learns that Sekai stabbed Kotonoha, after which Sekai assures him that they can "start over", much to his horror.

Makoto's background is expanded upon, especially in the Inori routes.

His role is still largely the same as in School Days, but the game takes place in a different continuity, as he is a side character. He is still in a relationship with Kotonoha and is cheating on her with Sekai while at the same time pretending to date Roka in order to provoke Yuuki's jealousy. In the "Yuu" routes, Makoto falls completely for "her" and begins a relationship.

Unlike the game and the School Days manga, the Makoto in the Cross Days manga is more sociopathic. He is in a three-way relationship with Sekai and Kotonoha, but reveals to Yuuki that he doesn't love either of them but likes them for their bodies and willingness to do anything for him. He is also mistakenly believed to be cheating with Roka, who lied about having a relationship with him in order to make Yuuki jealous. When Yuuki cross-dresses as "Yuu", Makoto tries to seduce "her" in a very predatory manner, and, after "Yuu"'s exposure, claims that he's open to Yuuki joining his harem.

Makoto is an accomplished housekeeper, especially proficient in culinary arts, even surpassing many female characters. It's possible that he learned these skills out of necessity as, according to his own statement, his mother is not good at housekeeping and is always at work, so he must do everything by himself to support home.

Although not seen, he can apparently make cloisonné-ware and silver jewelry, which he intends to make Kotonoha for Christmas. In the School Days manga, he makes Kotonoha a seashell necklace.

From his various videogame consoles, it can be deduced Makoto likes playing video games. In either Episode 2 of the visual novel, if Sekai accompanies him and Kotonoha on the rooftop, Makoto can mention that he enjoys playing arcade games and can offer to play a shooting game with Sekai.

Makoto also seems to particularly enjoy listening to music. In all School Days adaptations, Makoto is seen with a Walkman whenever he rides the train by himself. In either Episode 2 of the visual novel, if Sekai joins him and Kotonoha at lunch, Makoto can mention having been particularly excited for the release of a certain CD, causing him to breeze past a bookstore Kotonoha had wanted to check out at Sakakino-cho. In Cross Days, Taisuke can also mention to Yuuki that Makoto often stays up listening to late-night radio.

In Summer Days, Makoto is seen to be dragged away by Otome to repair vital assets for the rite of Summer Carnival, which hints that he possesses knowledge of carpentry. He goes fishing when he's not playing with Itaru, and catches enough for dinner and then some in a day.

In Cross Days, Makoto demonstrates his skills in clothing design when he gives "Yuu" a dress he sewed himself. This is possibly because of being the only male in his house between his mother and sister, and because he often looks after the latter, therefore necessitating that he know how to mend and patch clothes for them as well as himself. 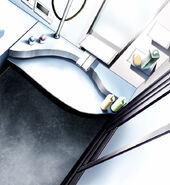 Makoto generally leaves good impressions to almost every character, at least during the initial phase of stories.