Kotonoha Katsura (桂 言葉 Katsura Kotonoha) is one of the two main heroines of School Days and a secondary character in Summer/Shiny Days and Cross Days.

Kotonoha is the oldest daughter of Manami and Mr. Katsura, as well as the older sister of Kokoro Katsura.

Raised in a wealthy family, she had a slim social life which was exacerbated by all the girls being jealous of her beauty, as seen with Nanami Kanroji, who attended the same middle school, and Otome Katou, who frequently bullies her along with her trio of friends.

Kotonoha is a beautiful girl with pale skin, maroon irises, and silky straight black hair that flows past her waist. Her body is svelte and matured for her age, as seen with her busty chest, second only to Manami Katsura throughout the series.

Her outfits vary in different medias. In School Days and Cross Days, Kotonoha is seen mainly wearing uniforms. In Summer/Shiny Days, she mostly wears a red one-piece summer dress and high-heels. She also wears a cyan bikini with white stripes and a white one-piece with a very low cut in School Days and Summer Days, respectively.

Because of her gorgeous body, almost all girls (except Sekai Saionji) think negatively of her, due to jealousy, and believe her to be promiscuous and is taking money from Makoto Itou to go on dates. Even Nanami, who is very mature, thinks negatively of her and treats her badly.

Generally, Kotonoha is an intelligent, gentle, polite and well-educated young lady with a reserved character. She is so reserved, in fact, there is no mention she has a single friend before she was acquainted with Sekai Saionji and Makoto Itou. Having almost no social life, she becomes incredibly dependent and devoted to Makoto. But this kind of firmness can lead to her to drastic repercussions. If she feels Makoto is leaving her and cannot be won back, such tremendous sorrow and desperation will drive her berserk or "yandere" (expressed by her lusterless eyes), render her to commit suicide, or to murder those she believes is stealing Makoto away from her. Her attachment to Makoto is so great that she refuses to accept that he would ever break up with her. Perhaps linked to her possible murderous side, if Makoto invites her to watch a horror movie, she admits she's a fan of horror and splatter movies but usually keeps quiet about it.

Although the reason is not specified, Kotonoha, being very girly and prudish, is afraid of being around guys, especially scared by being touched by the opposite gender, thus making for some awkward moments between her and Makoto at the beginning of their relationship. The situation worsens when Makoto constantly demands excessive physical contact and gets turned down. Finally, Kotonoha acknowledges fulfilling Makoto's sexual appetite is vital in tightening their relationship. Kotonoha will get over her psychological block and offers her body to Makoto in order to lock his heart with her and to drive her rivals away. After this, she suddenly gains the ability to manipulate situations far greater than Sekai, whenever she decides to win back Makoto from Sekai, as seen in endings Bavarois and Lust . 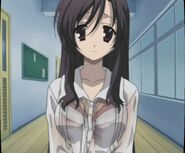 How Kotonoha's personality develops is almost entirely dependent on how comfortable she is with sexual activity. Initially she's very shy and quiet around Makoto and others. But depending on the route she can go from being a little more comfortable despite her shyness to becoming sort of sex maniac who is not afraid even using own body to win Makoto back. If things are played right, Kotonoha can even develop bisexual feelings towards Sekai, which allows a three-way relationship between them to develop (as is shown in Two Lovers ending or Cross Days manga).

However when Kotonoha gets greatly hurt emotionally she goes into Yandere mode. This happens usually when she's abandoned after she sleeps with Makoto, but also occurs when she discovers Makoto cheating on her very late in the game. Like most yanderes, Kotonoha can be cruel as she can be shown to manipulate Makoto and guilt trip him and other girls if Makoto chooses to stay with somebody else. Unlike Sekai she is willing to accept Makoto sleeping around with other girls and having more girlfriends as long as he stays with her as well. She also likes to use sex as a weapon if Makoto tries to break things off. She also along with Makoto encouraged Sekai to get an abortion and make out with him to hurt Sekai further and even accuse Yu of stealing Makoto away from him when he wanted to warn her about Makoto's cheating actions. Kotohona will mostly always forgive Makoto but be heartless around anyone else. Even in the manga when Makoto and Sekai break up and ask her for forgiveness she gladly accepts Makoto's apology but wants to kill Sekai right after despite of it.

Kotonoha's role in the anime is largely the same, becoming Makoto's girlfriend until he quickly begins to tire of her, as she is unwilling to do anything intimate with him. This pushes Makoto closer to Sekai and Kotonoha is later ignored by Makoto when she desperately tries to get his attention but is bullied. It is implied that Taisuke takes advantage of her fragile emotional state then proceeds to take her virginity by raping her during the school festival. Taisuke then asks her to date him but she tells him to forget what happened and runs off.

Her Yandere nature soon appears and she deludes herself into thinking she is still Makoto's girlfriend and "talks" with him on the phone. He eventually takes her back once he realizes how poorly he's treated her (and after none of the other girls are willing to talk to him anymore). After a dinner date, Kotonoha accompanies Makoto back to his apartment only for both to be confronted by Sekai. After revealing to the latter that Setsuna kissed Makoto, Kotonoha makes out with him right in front of Sekai, much to the other girl's despair.

In the manga version, her role is mostly the same as in the anime, the difference being that Makoto breaks up with Sekai because he feels guilty about cheating on Kotonoha and begs her to forgive his actions. However, Kotonoha has already gone insane due to the betrayal and tries to kill Sekai, only to accidentally harm Makoto when he intervenes.

Kotonoha, along with her mother and sister, are all pursuable heroines in Summer/Shiny Days with several routes dedicated to each of them separately or together. It's also possible for all female Katsuras to end up in a harem relationship with Makoto.

In the visual novel and manga, she is also the target of Yuuki's crush. However, she does not see Yuuki as more than a friend as she is already involved with Makoto.

Kotonoha is one of the major competitors of "who can give the best chocolate to Makoto". She happens to make her chocolate for him with some bizarre and occult materials.

Kotonoha appears as "Magical Word" to assist "Magical Heart" to fight against Docter S. She is seen to wear a very short kilt and a very tight-fitting suit and wields a katana.

As a good student and an intelligent academic girl, Kotonoha loves reading and always stays at the library to read many books for hours, she also seems to visit bookstores often. Whenever Makoto observed her on the train prior to their relationship, she was nearly always reading.

Although bad at sports, Kotonoha is proficient in martial arts, especially Iaido according to her younger sister Kokoro - which explains why she can decimate the rivals of Makoto's love with ease (plus the fact that her handsaw doesn't get blood-stained after slicing Sekai's neck). However, she says that because an athletic tomboy like Otome excels in sports, she admits she cannot stab someone like her to death.

She's strong enough to resist Makoto's sexual advances if she wishes to, though Taisuke seems to overpower her easily - possibly because Kotonoha considers this as part of destructing herself as reaction to Makoto's abandon.

Since childhood, Kotonoha has been involved in many activities, such as piano, ballet, Japanese dancing, calligraphy, etc. However, all of these were stopped after she got enrolled to Sakakino Gakuen since her mother allowed her to have more freedom if she can enter this school.

Kotonoha is also good at making specialized lemonade for Makoto, which the recipe for is learned from her mother. However, due to her sheltered life, she is not very good at general housekeeping - especially when it comes to culinary arts and knitting - but she works hard to learn for Makoto's sake as she takes their relationship seriously.

Many people has praised and sympathized with her femininity and loving nature to Makoto Ito, leading them to categorize her as "The Girly Girl" in contrast to "The Tomboy" Sekai, a Yamato Nadeshiko, or the stereotypical love interest. She also becomes one of the trademarks of yandere characters.

Kotonoha is the most-liked character among all characters of School Days since its release and keeps her championship title in following works. In Japan, she is titled as "言葉樣/Kotonoha-Sama (Kotonoha Her Majesty)" by supporters, while in both China and Taiwan she is addressed as "言葉女神 (Goddess Kotonoha)" by supporters.

Due to her reception, Kotonoha has the most promotion products of all the (female) characters.