Kokoro Katsura (桂 心 Katsura Kokoro) is a minor character in most of the Days games save for Summer/Shiny Days, where she is a sub-heroine.

As the younger sister of Kotonoha, Kokoro shares similarity with her like violet hair, fair skin and a pair of lovely eyes. Unlike her, Kokoro has two hair strands tied with beads (ribbons in Island Days) and her hair is only shoulder-length, similar to Sekai Saionji's. Kokoro has a short stature, being the second shortest character in the franchise save for Itaru Itou.

In Kokoro's routes, featured in Summer Days/Shiny Days, Makoto states her secondary sex characteristics (breasts) are emerging when attempting to have sex with her on beach.

Unlike her older sister, she's peppy, talkative, full of curiosity, and worries that her older sister has no social life. Despite being very young, her knowledge of intimacy far outclasses her older sister's and she feels sorry for Makoto when she learns that he and Kotonoha aren't doing anything indecent. She can also be somewhat manipulative, such as threatening to lie to their father that Kotonoha and Makoto are doing something indecent to make him play with her or arranging for Makoto and Kotonoha to have sex in Summer/Shiny days.

It was never stated what happened to her, or how she reacted, after the death of her sister in the bad endings where Kotonoha dies; however, in the manga, she finds her sister bleeding out and calls Makoto in a tearful panic. Also, in the aftermath of the ending Forever, Kokoro is shown to have left a drawing of her sister at her grave, blessing her to be happy in heaven, showing that her sister's death in any route brings great sadness to her and her mother.

She serves only as a minor character and is generally seen with Kotonoha at her home. She frequently teases Kotonoha about having a boyfriend and immediately demands to meet him.

She is delighted at discovering her sister has a boyfriend and is unaware of the problems their relationship faces. Her desire to be talk about their relationship and telling to her friends about it puts pressure on both Makoto and Kotonoha.

As with the anime, she's glad that her sister has a boyfriend. However, she also witnesses Makoto holding hands with Sekai and after the events of the school festival, blames the latter especially for her sister's depressed state. She is last heard calling a hospitalized Makoto in a panic after finding Kotonoha bleeding to death (having been stabbed by Sekai).

Her role is much the same as in School Days. However, in the Disappointment ending, she is implied to have gone with Yuuki on a double date with Kasannoin and Yae.

She appears briefly in a flashback of Makoto's.

Her role is greatly expanded in Summer Days, and further still in Shiny Days. She can be in a relationship with Makoto.

In her route, it is revealed that Kokoro, after several years of periodic raping by Makoto (Who have sex with all girls after win in jan ken pon game), grew from a cheerful child into a silent and reserved girl. When the Makoto threatens her that he will rape Kotonoha's daughter (which she has with Makoto in this continuity after lose in game) if she won't obey him, Kokoro breaks completely and submissively leaves the protagonist to do whatever he wants with her. 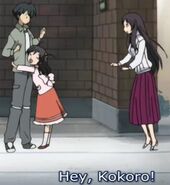 Kokoro hugging Makoto when she meets him for the first time.

Kokoro sitting in Makoto's lap to play cards against her sister.