not to be confused with Kagura Mikado of Fake

Kagura is a fourth grader at Moteharashou and is in the same class as her good friend, Hatsuka Hazama. Although she was already friends with Hatsuka in third grade, they became closer when she moved to the Snow Radish, which is close to Hatsuka's house. She lives with her mother Moegi Inou and younger brother Ayumu. There, she also helps her mother at the restaurant with Arisu, who sometimes works part-time there as a waitress.

Kagura was the eldest daughter of Moegi and Tomaru Sawagoe. Moegi raised both her and Ayumu alone and kept secret who their father was to everyone, causing Kagura and Ayumu to grow up without knowing that Tomaru was their father.

When she was a third grader at Moteharashou, she and Hatsuka were enrolled in a cram school where Tomaru worked part-time as a teacher. The two of them and the rest of their female classmates eventually came to admire him, calling him "onii-san" (Big Brother). During this time, the girls in the class would go visit him to "play" with him except Kagura as there were few opportunities for her to do so because she lived far away.

One day before the start of the new school term when she would become a fourth grader, it was was arranged for all the girls of her cram school class in to go play at Tomaru's apartment. However, on the way there, Kagura fell off her bike and the bike broke due to the snow, resulting in her being late and everyone being gone by the time she reached the apartment.

Afterwards, she started walking back home, depressed because her grandfather, the owner of Snow Radish, was going to retire, meaning that her mother would inherit the restaurant and they would have to move there. As it was quite a distance from the cram school, she wouldn't be able to attend the cram school anymore and thus, she had missed her last chance to meet with Tomaru.

On the way back home, due to the snow, she tries to hitch a ride on passing cars without success until a car stops by, almost hitting her. To her surprise, the driver of the car is Tomaru himself. After she asks him in a flustered manner for a lift, he lets her into the car.

In the car, Kagura tells him how she wanted to have visited and played with him at least once. Tomaru then offers to "play" with her as he did to all the other girls, after which he has sex with her. Afterwards, Tomaru just continues to drive in silence. Nervous, Kagura starts to talk to him, asking if he would promise make her his bride if she could sexually satisfy him, to which he agreed, making her very happy. After that, Tomaru dropped off Kagura near her house and they parted ways.

The next day, Kagura receives a call from Hatsuka, who tells her that Tomaru has quit the cram school and vanished. She also mentions hearing that while he ostensibly moved to be closer to his college, in actuality, he was going after the girl he likes, leaving Kagura very depressed. Four months later, Kagura discovers that she's pregnant. Although people tried to discourage her from doing so due to her young age, Kagura decided to have the baby and her mother didn't ask anything nor did she oppose her daughter's decision as she herself had become a mother at a fairly young age.

During the winter holidays, Kagura's aunt Asagi comes to stay in Snow Radish and enjoy the hot spring with two of her friends: Tomoe Sawagoe and, to everyone's surprise, Tomaru. In the room where Asagi and Tomoe would stay, Kagura brings up Tomaru's promise. However, Tomaru tries to dissuade her, telling her that his actual reason for moving away was to avoid his sexual relations with his students being discovered and that he only had sex with her on the way because he thought he would never meet her again. He also tells her his plan to get intimate with Tomoe during this trip and eventually marry her.

Despite this, Kagura doesn't give up, in the end, Tomaru proposes a "game": if during the three days and two nights of the trip, Kagura can have satisfactory sex with him, he will keep his promise and it will be Kagura's win. If she can't do it or before that he has sex with Tomoe and the other girls, it will be his win.

After that, Kagura returns to the restaurant and discovers that Tomoe has gone to carry her luggage to her room with Tomaru helping her, leaving the two alone. Nervous about what could happen with the two of them alone, Kagura goes searching for them but when she reaches the room, they're already gone. Depending on the choices, she may or may not find them on the hot spring. If Kagura isn't able to find them, Tomaru will be able to charm Tomoe a bit and if she is able to find them, she will interrupt their conversation.

Either way, Kagura and Tomaru end up returning to the restaurant. There, Tomaru meets with Moegi, and Kagura discovers that they already knew each other and apparently had some sort of relationship in the past. They try to get Kagura to go away so they can talk alone, but to Kagura's relief, Arisu suddenly arrives at the Snow Radish, interrupting the two. However, Tomaru finds Arisu to be cute and seems interested in her, which makes Kagura uneasy. Kagura then goes to her room and after sorting out the situation, she goes take action.

Soon after Snow Radish Vacation, Tomaru and Kagura were engaged and she gave birth to a daughter, Hajime Inou. A year later, Tomaru began to use her, Moegi, and Arisu to "attract" more customers to Snow Radish. During this time, Kagura was prostituted to Moteharashou's principal as part of her "service" to Tomaru and eventually gave birth to a son, Wataru.

Eventually, the principal died and passed his fortune to Kagura, after which Tomaru convinced Kagura to give it to him before disappearing from her life again. Kagura's life soured when all of the debts that Tomaru had incurred were sent to Snow Radish and she was abducted by a Yakuza for payment, becoming pregnant with another child. Fortunately, the Yakuza was killed by a pursuer, allowing Kagura to escape and return home. Still, her misfortunes were only beginning as she was soon abducted and confined again by one of her teachers at Moteharachuu, becoming pregnant with another child, eventually being saved by Hatsuka's wits and intellect.

Sometime after graduating from Moteharachuu, Kagura was raped by her brother Ayumu, who had became Asagi's sex slave. A year later, Tomaru returned to Snow Radish and suggested a way to cure Ayumu's condition which resulted in another child. Their first daughter, Hajime, took a liking to Tomaru, causing Kagura believe that Tomaru had finally come back to fulfill his promise of marrying her. This belief was soon shattered when she discovered that Hajime was impregnated by Tomaru, which eventually resulted in her death while giving birth to her daughter. This resulted in a big quarrel that ended their toxic relationship for good and Tomaru left again. Afterward, Ayumu forced her into a relationship with him, even making her son Wataru help him, which resulted in another daughter.

Year later, Asagi once again "trained" Ayumu as her sex slave, and her husband Juuzou decided to force an affair with Kagura as revenge, for withholding the truth that he had been cuckolded for years, which resulted in another child. Wataru and some of her daughters soon left home, leaving only Mai and Rina with her. Eventually, Asagi acknowledged the affair and moved away with her family, throwing Ayumu away in the process. Deciding to cure his broken heart, Kagura accepted a relationship with him, which resulted in two more children, and she eventually managed to cure Ayumu, allowing him to live a normal life. During this time, her sister Youko attempted to seduce Ayumu, but was stopped with the combined force of Kagura and their mother.

With her misfortunes, seemingly, finally over, Kagura decided to expand the Radish Business, renovating a beach house at Haramihama into a family restaurant named "Summer Radish" with the help of Asagi. This would eventually lead to her meeting with her best friend's son, Shun.

She has a very small role in the prologue compared to Mai and Youko. Depending on the choices, she may meet with Shun at Summer Radish or in his dormitory.

She died some time before Shiny Days. In a certain route, Setsuna and Makoto visited her grave, and is in the same graveyard as the Katsura family tomb (and where Kotonoha is buried in School Days's ending Forever).

From the events of Snow Radish Vacation until seven years before Summer Radish Vacation, Kagura was very much besotted with Tomaru even after everything she had been through because of him. It is possible that Tomaru had a hold on her, as she was willing to do things such as recruiting classmates into Tomaru's prostitution ring and looking the other way when their daughter Hajime became pregnant by him. In the latter case, it took Hajime dying in childbirth for Kagura to break out of whatever hold Tomaru had on her. 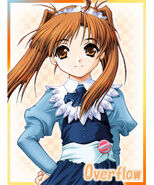 Kagura hitches a ride with Tomaru during the snowstorm 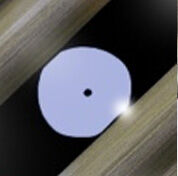 Spying on her mother with Tomaru 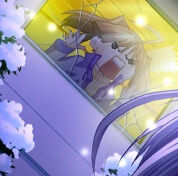 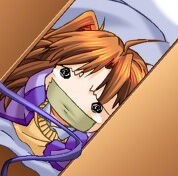 Roped into the closet 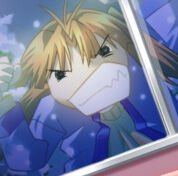 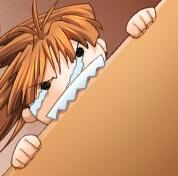 Hatsuka dresses Kagura as the bride

with her first daughter Hajime