Itaru is the second child and only daughter of Moeko Itou and Tomaru Sawagoe, as well as the younger sister of Makoto.

As of her parents' "divorce", she lives under the custody of her father, but occasionally sneaks out to visit her much adored older brother.

Itaru appears to be a little pale child. She has twin tails. She is seen wearing a sweater and carrying a bag.

Itaru is a kind, wholesome, carefree and overall cheerful girl. Despite being a very young child, she has the courage to go to her brother's home alone without permission. She also loves her brother deeply and can also mention that she hates their father.

When Itaru appears in the visual novel, it's always unprompted because she runs away from home at random times. In some routes, she can come over to Makoto's to find he's not home and then go over to Otome's to play with Karen.

In some routes, Makoto looks after her while their mother works. He reads her bedtime stories. She once said she wanted to be his bride. Itaru can also meet Makoto's then-girlfriend, Kotonoha, while she's out walking with him. If Makoto is backed into a corner by Sekai, Kotonoha, and Otome in certain endings she can come to Makoto after running away from their father. Makoto then expresses his feelings for all three girls and relieves some pressure off him. She can also come to a pool event organized by Taisuke.

In the anime, she is not seen but is mentioned a few times.

Makoto and Itaru have a loving brother-sister relationship. In fact she loves her brother so much that she is willing eat carrots and peas because Makoto is making it. Makoto then rewards her with a hamburger steak for being a good girl.

Tomaru doesn't make any appearance but can talk with Makoto on the phone to ask if Itaru is with him, possibly being worried. Tomaru has a history of sexually abusing (and impregnating) small children like Itaru, which may be the reason she doesn't like him. 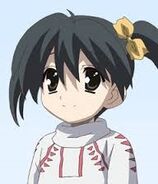 Being read a story by her brother

Getting to know Kotonoha

Makoto holds Itaru's frog backpack while she enjoys a treat.

On her birthday
Community content is available under CC-BY-SA unless otherwise noted.
Advertisement