Inori Ashikaga (足利 いのり Ashikaga Inori) is one of the main heroines of Shiny Days.

She is the biological daughter of Natsuhi Ebata and Shun Hazama. Shortly after she was born, she was abandoned by Natsuhi before being adopted by Hayato Ashikaga.

In her childhood, she was close with Otome Katou, who was her cousin. Because of her chronic illness, Inori was a frequent patient of Moeko Itou, which in turn regularly put her in conflict with Moeko's son, Makoto, who would brag about his father's position as head of the hospital. In turn, Inori would brag about her own family's importance, after which Makoto declared that he and Inori would marry and "take on the world together".

Inori is a girl with average height with yellowish eyes and navy blue hair tied into twin-tails. She is also rather buxom, rivaling Kotonoha Katsura, and has a slender body. Inori is mostly seen in casual clothing that consists of a hoodie and short-pants, or a shrine priestess uniform with which she lets her hair down.

While blunt and rather easygoing, Inori is not above using her position as shrine maiden to achieve her own goals. Her way of wording events and exaggeration tend to cause more troubles for the people around her, such as when she caused Otome to believe that Setsuna had ravished her. Despite her negative traits, Inori is also shown to be a sincere person. She is old-fashioned, believing in devotion to the person she loves, something that made her unable to forgive Natsuhi for having an out-of-wedlock child with her (adoptive) father.

She also shows a love of electronic games, being disappointed by the Kiyouras' lack of a game console and ultimately borrowing a handheld.

Inori is walking in front of the Radish when Setsuna Kiyoura accidentally throws a bucket of water on her due to having been groped. Inori is about to forgive her when she sees Karen Katou and the Nijou twins coming and hides behind Setsuna. The trio pass by but turn around, prompting Inori to grab Setsuna's clothes to hide more effectively, only to accidentally remove her top. Setsuna, in retaliation, knocks out Inori by kneeing her in the head. Setsuna drags Inori into the restaurant, and after convincing the others that she didn't murder her, manager Youko Saionji takes Inori to the hospital. Youko realizes Inori has nowhere to go and decides to take her in, but when they get home, they learn that her daughter Sekai has the mumps. Setsuna's then forced to take Inori in herself. After arriving, Inori decides to take Setsuna's room before Setsuna can deny her by claiming her wound might open.

Inori on the Family Chart

Thanking her father for help. 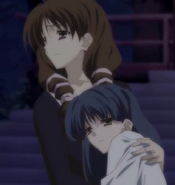 Caught by Natsuhi and Take