Hikari Kuroda (黒田 光 Kuroda Hikari) is a secondary character throughout the Days series and a sub-heroine of School Days.

Hikari is an only child whose family owns a confectionery store and café famous for its lemon custard cake. At the time of the story, Hikari is temporarily working part time at her family's newly opened second shop, Sweets Ohara, a significant location in Cross Days.

Hikari grew up in Aoi Town and attended the same middle school as Taisuke Sawanaga, Yuuki Ashikaga, and Tanaka, developing a crush on Taisuke.

After graduating middle school, Hikari moved to Haramihama and enrolled in Sakakino High, where she befriended Sekai Saionji, Setsuna Kiyoura, and Nanami Kanroji.

Hikari is slightly taller than Sekai and Kotonoha Katsura, and has similar measurements to the former. Her most prominent feature is her squid-rings hairstyle. She's almost always seen in her school uniform but can also be seen in a casual attire that consists of an orange hoodie with a pale skirt. She's mentioned to be one of the cuter girls in class by Makoto Itou in a certain route.

Around her friends she's very friendly and social, but she generally holds a negative opinion of boys (especially Makoto). She's the most childish of the cast and sports an unduly knack for whining and prying into the affairs of others. However, after she sees Makoto with Kotonoha, she informs Sekai of this because she was worried Makoto was cheating on Sekai. Besides her very prissy and bubbly personality, she can also be a temperamental tsundere.

Ironically, in spite of her petty and high maintenance nature, she seems to be one of the few girls who doesn't go out of the way to harass Kotonoha - possibly because her constant prying into people's private lives and sharing the same train to school means she may be one of the few to know Kotonoha's personality doesn't match the rumors about her. She also doesn't make any real effort to interrupt or sabotage Kotonoha's relationships - the exceptions being if Makoto is already in a relationship with someone else and therefore cheating, or if Kotonoha is being fawned over by or instead dating Hikari's crush, Taisuke.

Hikari can be considered extremely casual and carefree, showing little to no issue with more amorous actions such as being involved with swinging or cheating (though only after she herself loses her virginity), albeit seeming far more comfortable with her "partner" doing it instead of herself. In her endings, she either goes out of her way to "lend out" Makoto to numerous other girls simply because she thinks he's too good in bed not to share, or she rather amicably (if not happily) opts to carry his child even though he's dating Sekai (though in the latter case she keeps him strictly to herself and Sekai).

She generally serves as a minor character in most routes. Makoto can set up her with Taisuke after the latter demands that Makoto set him up with someone. She can also start dating Taisuke after she runs into him alone after going to the pool.

Her most prominent role happens when she and Makoto spy on Taisuke and Kotonoha having sex (or Taisuke raping Kotonoha). Makoto figures out that she likes Taisuke and offers to help her. Makoto plans to pretend Hikari is his girlfriend and offer to swing with Taisuke and Kotonoha. Because she took too long choosing an outfit though, Taisuke and Kotonoha have already had sex by the time they meet up and ask to watch Hikari and Makoto do it. They're forced to do it and Hikari gives her virginity to Makoto, though confesses that it actually felt much better then she expected. After that, Hikari and Taisuke have sex but she is abandoned right after Taisuke is done with her.

She says Taisuke was awful in bed compared to Makoto, the latter of whom offers to "comfort" her anytime she wants. Depending on if Makoto comes inside her or not, she may end up pregnant with his child. See Endings for more details.

Her relationship with Taisuke develops most in the LxH version of the ending To My Children. In it, she's married to Taisuke and has a son with him.

Hikari's mentioned to like Taisuke and makes many obvious attempts to date him, but this goes unreciprocated or unnoticed by Taisuke. She then starts sleeping with Makoto, although she stops after Sekai claims to be pregnant, being afraid that the same will happen to her.

Hikari still appears as one of Sekai's friends and is still implied to have a crush on Taisuke.

During the events of Summer/Shiny Days, Hikari helps her family run the pastry shop five days a week, but is allowed to have some free time for herself which she uses to visit her friends over the neighborhood.

She often encounters former middle school acquaintance Yuuki while working at Sweets Ohara. She is also initially mistaken as being Yuuki's girlfriend by Roka Kitsuregawa. She can also witness such events as Yuuki and Kasannoin's double date with Hanon Nijou and Niki Ookuma. In Feelings Pile Up, she attends the bonfire with Taisuke. In Giving Up on Everything, it's mentioned that she, along with Roka and Makoto, has started a prostitution business.

As with the visual novel, she works at Sweets Ohara. However, the misunderstanding that she is dating Yuuki doesn't occur. In the final chapter, when Makoto attempts to humiliate Yuuki by exposing his crossdressing, Hikari laughs it off, saying that Yuuki wouldn't do that because he has "such a cute girlfriend" (referring to Roka). 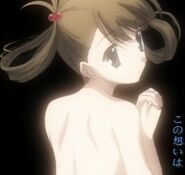 Appearance in the TV opening 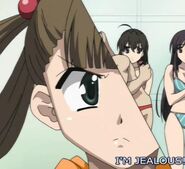 Working with Nanami as a maid-style waitress.

Hikari with her hair down in the visual novel

Embarrasses over a perverted sight
Community content is available under CC-BY-SA unless otherwise noted.
Advertisement