Cross Days is the third in the release order of the "Days" series in 2010, following the 2006 Summer Days and preceding the 2012 Shiny Days, is a parallel story to School Days where the main character is second semester male freshman: Yuuki Ashikaga.

In some routes Yuuki is also a cross-dresser, as seen in the title picture.

This story also features Nanami Kanroji's boyfriend, Kyouichi Kasannoin, in his first onscreen appearance as a main character. This game also features a deeper look at the mental state of the basketball team, further increasing the awareness of the reasoning behind some actions of the characters in the original plotline.

Like it's prequel visual novels, Cross Days requires extremely minimal gameplay. At predetermined intervals the game presents the player with one or two choices to make, or the player can choose to not make a choice. These choices change the course of the story and takes the player to one of the many endings.

Like it's predecessor and unlike traditional visual novels that consist of the protagonist talking to static images of characters, Cross Days is unusual in that it incorporates motion and voice, making it similar to an anime series. The player is initially given the ability to pause, skip to the next part, return to the beginning of the current part and return to the beginning of a previous part. The player can also turn on the ability to skip to the next choice, although if the player hasn't viewed a specific part the player will be stopped at those. After the player has viewed a specific part the ability to fast forward becomes available. Progress can be saved at anytime in up to 100 slots.

The game is a parallel to School Days, unlike Summer Days, which is a spinoff of the original story.

The game focuses on Yuuki Ashikaga, who develops feelings for Roka Kitsuregawa, a member of his sister's basketball team. However, due to a misunderstanding, Roka thinks he is going out with Hikari Kuroda, a former middle school classmate. Meanwhile, Yuuki also has a crush on Kotonoha Katsura, who frequently visits the school library where Yuuki works as a library committee member.

In an effort to make Yuuki jealous and draw him away from Hikari, Roka claims to be dating Makoto Itou. However, Yuuki knows that Makoto is Kotonoha's boyfriend, and has also seen Makoto kissing a third girl (Sekai Saionji). The story follows Yuuki's attempts to clear up the misunderstandings with Roka and repair Kotonoha's relationship with Makoto.

Depending on the player's choices many endings can be reached, both good and bad.

Based on the story of the game, Cross Days was published into a manga, written by Yoko Kagura and illustrated by Homare Sakazuki. 0verflow announced on April 4, 2010
that it would make its serialization debut in Monthly Comp Ace on April 26. The series was circulated until August 2010,[12] published by Kadokawa Shoten into a
first and second volume, released November 26, 2010 and June 25, 2011, respectively.

The manga follows a radically different plot from the game, focusing on Yuuki's efforts to "save" Kotonoha and Roka from Makoto by revealing to them his evil true nature. To do so, he crossdresses and seduces Makoto as "Yuu". In contrast with the game, in this storyline Makoto is in a stable three-way relationship with Kotonoha and Sekai. 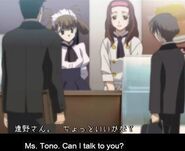 Mr. Katsura (accompanied by Hikari and Yuuki) calls the woman with the red headband Ms. Toono.
Community content is available under CC-BY-SA unless otherwise noted.
Advertisement