not to be confused with Ai Ogata from PureMail

Ai attended the same junior high as Makoto Itou, though she transferred in during third year. Like Otome Katou, Ai also has had feelings for Makoto since middle school. However, she's also far more open about it and acts more directly in a way to achieve her goal, willing to sabotage both Kotonoha Katsura and Sekai Saionji's relationship with Makoto in the process and in Cross Days, involve Yuuki Ashikaga into the problem as well.

Outwardly, Ai is impeccably polite and friendly. She's very self-conscious and apologizes incessantly when she wrongs someone else. She often has trouble speaking her mind, however, and this leaves her easily manipulated. Despite this exterior friendliness though, she is actually quite cruel, if not sociopathic, when she's trying to get what she wants. In both Cross Days and Shiny Days, she lies and cheats those around her to try end up in a relationship with whoever she's pursuing, be it Yuuki or Makoto. However, in Going Forward, Facing Each Other, she graciously accepts her loss and lets Yuuki be together with Roka Kitsuregawa, leaving town in order to raise the child she bears on her own.

She makes a random appearance in a static class scene. Before the first semester started, she is mentioned to have spotted Setsuna Kiyoura being bullied and to have informed Sekai.

She is briefly seen in classroom scenes and walking and talking with Hikari Kuroda in the final episode's epilogue.

She makes no appearance.

In both versions, Ai is a minor supporting character who attends the Radish restaurant on occasion. Her first appearance in Shiny Days features her staring thoughtfully into the distance. She's friends with Otome and Karen Katou, but the sisters often bully her around, forcing her to do much of the legwork in preparation for the Shrine festival. It is revealed that she and Makoto were supposed to confess to each other during middle school graduation, but failed due to Otome's intervention (which might possibly have been the catalyst for her developing her more manipulative tendencies; the belief that she would be cheated out of being with someone she cared about if she wasn't as ruthless as those out to stop her). Despite harboring feelings for Makoto, Ai is not a romanceable heroine. She has a sex scene in one ending in which she seduces Makoto while Setsuna's in Paris, but Makoto ultimately dumps her in favor of Setsuna.

She often eats lunch with Hikari, Setsuna, Taisuke Sawanaga, and Tanaka. She also leads Roka to believe that Yuuki is dating Hikari. In certain routes, she can develop a sexual relationship with Yuuki.

She appears as a background character in classroom scenes and at Aqua Square. 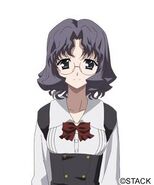 Ai Yamagata and Hikari Kuroda in the epilogue of the School Days anime
Community content is available under CC-BY-SA unless otherwise noted.
Advertisement